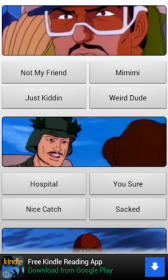 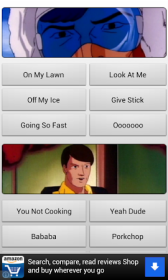 This is a soundboard of clips from the popular Fensler Films GI Joe PSA remakes. There are over 60 great quotable clips in this app. In this version: Added two new sounds. Volume buttons control media volume. Hold button to set ringtone or notification. Updated graphics. Porkchop sandwiches!

According to the antivirus report, GI Joe PSA Soundboard is safe and secure. The Boss Key is the developer of this application that can be found in the Entertainment category. The app has been downloaded and set up by over 50K users and its latest update was released on Jul 16, 2013.

GI Joe PSA Soundboard has the average rating 4 on Google Play. Ads are a part of this application. Download the .apk setup package of GI Joe PSA Soundboard 1.5 that is free and check out users' reviews on Droid Informer. The file size is 2 MB and the app is developed for Android 1.6 and higher.

In users’ view, the strong point of the app is a nice interface.

Horror Mobile Ringtones
432
♬ If you are a fan of scary horror movies.
1.8
.apk

Halloween Ringtones
269
It is great most popular app with best scary ringtones.
8.5.6
.apk

Hue Haunted House Maker
6
Thie H3Maker is like a remote control for your own haunted house.
1.9

Reggae Live Wallpapers
21
Enter the happy world of an amazing sound thanks to the latest Reggae Live...
1.5

Halloween Live Wallpapers
1
It is the end of October and you are impatiently waiting for that last day...
1.0

Zombies Scary Sounds Effects
644
We all love a good scare from time to time and the scary zombie sound effects...
1.6