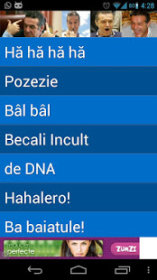 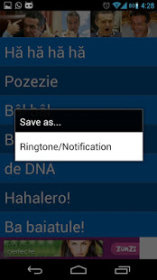 An application that depicts the rants of Gigi Becali, the eccentric millionaire, and most of his memorable one liners.

Gigi Becali has been scanned for viruses and it has been found completely safe. This application is designed by OQ Labs and its category is Entertainment. Google Play displays that the app is rated 3.1 by its users and can be downloaded by people aged 14 and older.

Get the .apk file of Gigi Becali 1.2 at no cost and check out users' reviews on Droid Informer. This installation package occupies 1 MB on disk and it works flawlessly on Android 1.5 and higher.

King of Baccarat
120
This application is not for gamble. It is made just for fun!
1.2
.apk

BlazeTV
2,1K
It is the best source for the most thought-provoking personalities and conservative...
1.0

Rasta Keyboard
33
The app is a fantastic keyboard changer with the amazing collection of "reggae...
1.5.3