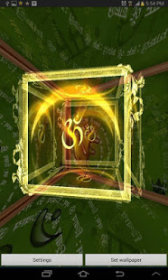 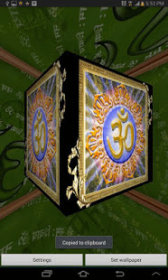 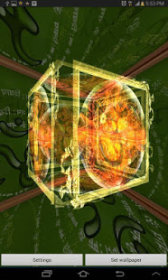 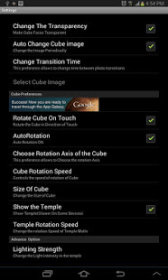 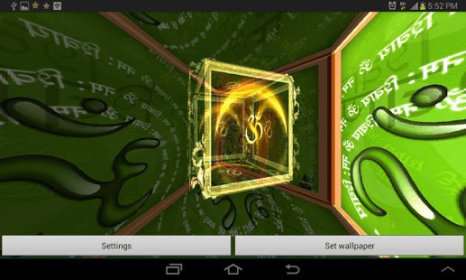 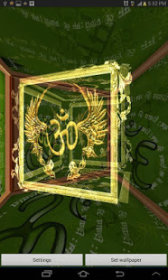 Om is a mystical Sanskrit sound of Hindu origin, sacred and in various Dharmic religions such as Hinduism, Buddhism and Jainism. The syllable is also referred to as omkara or aumkara. Om is placed at the beginning of most Hindu texts as a sacred incantation to be intoned at the beginning and end of a reading of the Vedas or prior to any prayer or mantra.

Supreme Droids is the creator of the app that belongs to the Lifestyle category. 3D OM Live Wallpaper has been downloaded and set up by over 10K users and its latest release is dated Aug 3, 2016. People rated the tool 4.3 on Google Play.

The statistics reveal that this application is popular mostly among Samsung and Spice users. Download the latest .apk file of 3D OM Live Wallpaper 3.3 free of charge and check out users' reviews on Droid Informer. You will need 6 MB of free disk space to set up the app that is compatible with Android 4.0.3 and higher. The app has been scanned for viruses and it has been found totally safe.

Based on the users’ reviews, the decisive plus of this application is a beautiful design, though some people say that the tool possesses such a disadvantage as bugs or glitches.

Om Meditation Sounds HD
474
Om is the most divine eternal sound which we hear when we go into deep state...
1.92
.apk

OM 3D Live Wallpaper
89
It is a beautiful live wallpaper with orange color in the background...
1.4
.apk

All God Mantra
612
All God mantra at one place.

Ganesha HD Live Wallpaper
1,9K
Lord Ganesha is one of the most prominent deities in Hinduism.
2.4
.apk

Happy Birthday Cake Designs
4,5K
Is it your friend's birthday? Is it a special occasion?
2.4

Wonderful Decking Ideas
828
If you're looking for fabulous decking ideas, you're in the right place!
2.4