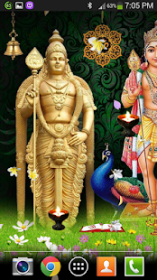 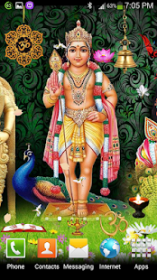 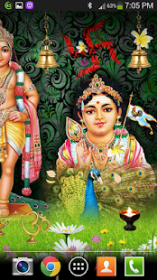 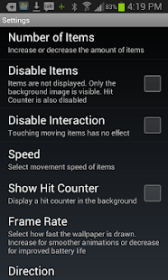 This is a beautiful high quality animated live wallpaper of Lord Murugan. It features Swami Murugan and his tallest statue which is in Batu Caves, Selangor, Malaysia with shower of animated flowers and leaves, just touch them on the screen to transform them into flying Diyas. Lord Murugan is a popular Hindu deity of the Tamil Land also known as the God of the Tamils.

According to the antivirus report, Lord Murugan HQ Live Wallpaper is safe and secure. HobbyPoint.in is the creator of this application that can be found in the Personalization category. The app was downloaded and set up by over 50K users and its latest stable update was on Mar 8, 2017.

Lord Murugan HQ Live Wallpaper has the average rating 4.5 on Google Play. Advertisements are a part of this application. Samsung and Micromax users highly appreciate the app.

Download the free .apk file of Lord Murugan HQ Live Wallpaper 1.0 and check out users' reviews on Droid Informer. The installer takes up 2 MB on disk and it runs on Android devices 2.3 and higher.

Kanda Shasti Kavasam
131
It is composed by Devaraya Swamigal.
1.0
.apk

Subrahmanya Karavalambam
8
Skanda Sashti is observed on the sixth day of the bright fortnight...
1.1.2
.apk

Lord Murugan Tamil
201
This application provide all about the tamil god murugan.

Virtual Hindu Temple Worship
1,1K
May God bring peace and prosperity to you and your family.
1.1

Diwali HQ Live Wallpaper
185
Happy Diwali to everyone. This is a High Quality Beautiful interactive Diwali...
1.0