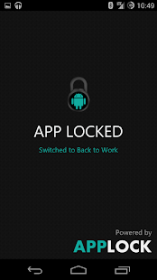 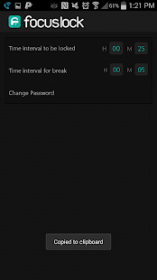 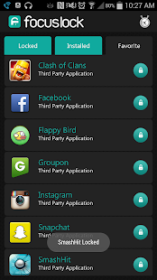 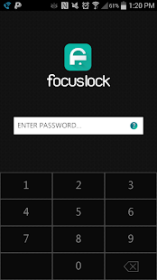 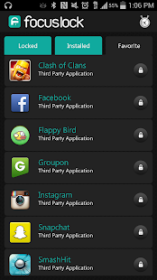 Have a tough exam coming up, project due date is close but you can't put your phone down? Focus Lock, the digital adderall of the distracted and procrastinating masses! Simply start by selecting the apps you want to lock out and set a timer for when they will unlock. Hit the locks and be distraction free from all the social networks and apps you are accustomed to.

Download the .apk setup package of Focus Lock 2.0 that is provided for free and read users' reviews on Droid Informer. The file size is 1 MB and the app is developed for Android 3.0 and higher. This application was checked for viruses and it was found 100% secure. Focus Lock is the developer of the tool that belongs to the Productivity category.

The most recent update of Focus Lock was released on Sep 20, 2014 and the app was downloaded by over 100K users. On Google Play, this application is rated 3.1 by its users. The tool is very popular among Samsung and Asus users.

According to the users’ reviews, the obvious benefit of Focus Lock is the simple interface, though some people have noticed that the app possesses such a disadvantage as multiple notifications.

Universal Block Annihilation
2
It is 7 games in one in which you put polyominos on a grid in such a way...
8.3
.apk

Wave Control Pro
431
Control your music and video playback and calls with waves of your hand over...
1.02

Mandala Zipper Lock Screen
3
If you were searching for a way to decorate your smartphone in a new way...
1.0

Firefly Lock Screen Passcode
17
✾ If chasing fireflies in the evening is one of your favorite childhood...
4.0
.apk

Focusbot
We live in a busy world. World is full of interruptions and requests from other people...