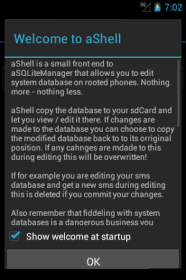 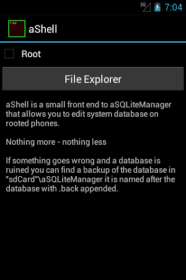 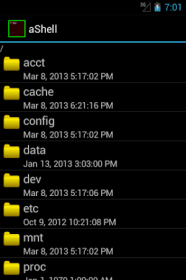 Andsen is the creator of the app that can be found in the Tools category. AShell has been downloaded and installed by over 10K users and its most recent release is dated Mar 14, 2013. This application has the overall rating 3.9 on Google Play.

Download the latest .apk file of aShell 1.1 for free and have a look at users' reviews on Droid Informer. You will need 93 KB of free disk space to install the app that is compatible with Android 1.6 and above. The app was scanned for viruses and it was found 100% safe.

Files Lite Small App
575
Files is a small application by which you can perform various file operations...
3.50
.apk

Screenshot Now
26
The most complete and easy to use screenshot app for your tablet.
1.3.2

GREP On The Run
33
It is made to be able to test Global Regular ExPressions on your Android device.