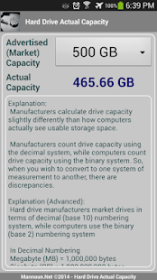 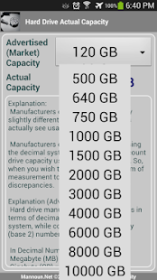 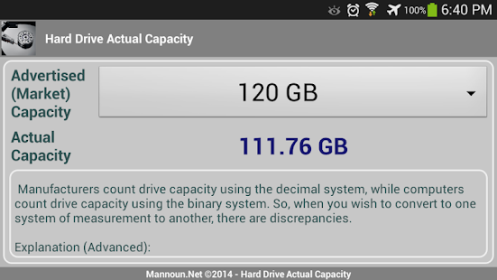 Just bought new Hard Disk Drive with Labeled Capacity 500GB but your computer shows only 465. 66 gb! Why a Hard Drive s capacity often appears to be less than advertised label when showing in Microsoft Windows or Apple Mac Need to explain to your clients how much they will get when they they purchase new 4TB Hard Disk Drive.

Hard Drive was originally developed by Mannoun.Net and it is listed among the Tools category. This application has been downloaded and installed by over 10K users and its latest update was released on Jun 27, 2014. On Google Play, the app has been rated 4.1 by its users.

Adverts are a part of Hard Drive. A number of users set up this application on their Vodafone and Sony devices. Get the latest .apk setup package of Hard Drive 1.0.2 free of charge and read users' reviews on Droid Informer. You will need 2 MB of free disk space to set up the app which is created for Android 2.2 and above.

Byte converter
22
This is Simple Byte Converter. It is possible to easily change the unit.
2.0

OfficeSuite
1,2M
It is the smart choice for office productivity.
3.9.22

Units Color Age & Time
347
A to Z Converter is a one stop converter app developed for students...
1.38

Light Meter Pro
18
This is the ad-free version of light meter.