With the launch of Galaxy S8 Samsung introduced its own virtual assistant called Bixby. Here’s how it compares against its older siblings.

It’s official, Samsung Galaxy S8 is now up for preorder and it comes with an in-house digital voice assistant – Bixby. Early reviews were generally mixed, branding the assistant as 'half-baked', as it supports only a few native apps at this stage. However, we still got a much clearer picture of the Samsung’s own little helper. Let’s have a look at its strengths and weaknesses, as well as at where it stands against its closest competitors – Google Assistant, Siri and Cortana.

Though Bixby may seem like a recolor of an all too familiar concept at first – it's actually the vector that sets it apart. Where Siri and Google Assistant act more like sophisticated search engines, constantly learning from the web – Bixby takes a more personal approach. It adapts to your habits and preferences – monitoring which apps you use more frequently and at what time. Swipe right from your home screen or press the dedicated ‘Bixby’ button and you’ll get suggestions and info based on your activities – both casual and online. It also connects to your smart home devices, gives you weather and news reports, helps you set reminders and much more – rolling a whole bunch of apps into one.

Samsung pushes the boundaries even further as they claim that everything you can do with touch can be done with voice. Just ask and Bixby will do it, well, at least to some extent. While it is yet unclear how Bixby Voice will do with regular web searches – where Siri and GA really shine – it can cope with simple tasks like sending a picture or playing a video just fine. You can even mix voice and touch where possible to achieve better results. This could come in handy when you’re filling in a form or writing an email. 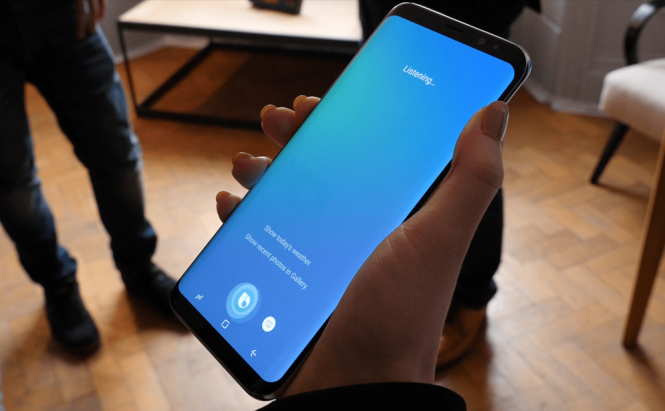 Bixby will do routine tasks for you - just ask.

Finally, there is Bixby Vision and it appears to be the most controversial part so far. Basically this is the kind of augmented reality feature Apple is betting upon for this year’s iPhone 8. You point you camera at an object and Bixby tries to come up with a list of pictures of similar objects. It can also provide you with a link to where you can buy that thing. When you point the camera at a building – it gives you the address and details. When you look at a text in a foreign language – it tries to translate it with Google Translate. While it sounds fantastic on paper many early reviewers have experienced glitches both with pictures and partially untranslated text, indicating that the software is still pretty raw.

While all these features have already been implemented in a number of separate apps, Bixby’s novelty is in combining the three – Home, Voice and Vision – and making them fully integrated and easy to use. However, the future of the assistant will mainly depend on how well it will work with third-party apps. Samsung makes bold promises, and, yes, it is still too early to judge, but there are two major obstacles they’ll have to overcome. First of all – Bixby is a Samsung exclusive. Sure, it will appear on every new Samsung handset starting with Galaxy S8, but the Android market is way bigger. And secondly, and most importantly, the place is already occupied by Google Assistant, which comes to more and more Android devices and already supports an enormous fleet of apps. As for now Bixby looks more like a niche product – akin to Microsoft’s Cortana – that struggles to find its place in the already oversaturated market.