Interested in seeing which is better: Apple's iPhone X or Samsung's Galaxy Note 9? Let's compare the two flagships and find out together. 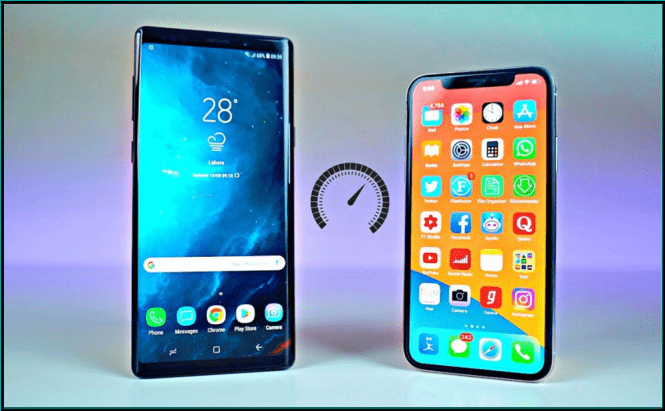 Apple and Samsung are the two largest companies on the smartphone market and it's no secret that they're bitter rivals. Each year they try to one up each other and the quality of their results has amassed them a huge following. Since the iPhone XS will only have 3 months on the market, this year's battle was waged between the iPhone X and the Galaxy Note 9. Let's compare the two flagships and see which one is worth your money.

Performance wise, the two flagships are neck and neck despite the difference in technical specifications. The Note 9 sports 6 or 8 GB of RAM and an octa-core chip running at 2.8 GHz, while the iPhone X only has 3 GB of RAM and six-core processor that's an year older. However, thanks to the fact that the iPhone has an operating system designed specifically for it, Apple's product runs just as fast if not faster than Samsung's device. However, there's one significant difference between the smartphones: the size. The Galaxy flagship is larger and sharper with 6.4 in and 516 ppi versus the 5.8 in and 458 ppi sported by the iPhone. However, this also means that even though the iPhone X only embeds a 2,716 mAh battery while the Galaxy Note 9 sports a 4,000 mAh one, they last roughly the same amount of time.

As far as cameras are concerned, both feature great technology. However, this time, even though the Galaxy Note 9 looks better on paper, I would give the edge to the iPhone X. Both phones feature a 12Mp wide-angle and telephoto camera on their rears, which offer basically the same capabilities. However, the TrueDepth feature makes the iPhones 7 Mp front camera more attractive than Samsung's 8 Mp one.

Lastly, in the design and features category, the iPhone X is the clear victor. Unfortunately for Samsung, the iPhone's classy and distinctive look will outclass any other phone no matter how beautiful. Moreover, Apple's assistant, Siri has been on the market for a very long time and is still much better than Samsung's relatively newly launched Bixby. The Apple Pay system is also much better established and more popular than Samsung Pay, while the FaceID and TouchID functions are superior to what the Note 9 has to offer. Additionally, the 3D Touch feature is very interesting and unmatched by Samsung's device. Lastly, as I've already mentioned, the iOS is specifically designed for the iPhone, which is a huge advantage that a glazed over Android cannot match.

There you have it friends, here is how the Galaxy Note 9 compares to the iPhone X. The only thing I have left to say about the subject is that many features that Apple's products have to offer are a lot less useful outside the U.S. Finally, the American giant has recently unveiled its new line of iPhones and the iPhone XS, iPhone XS Max and iPhone XR are even better than the iPhone X.