Take a look at our list of the most captivating games the hidden object genre has to offer. 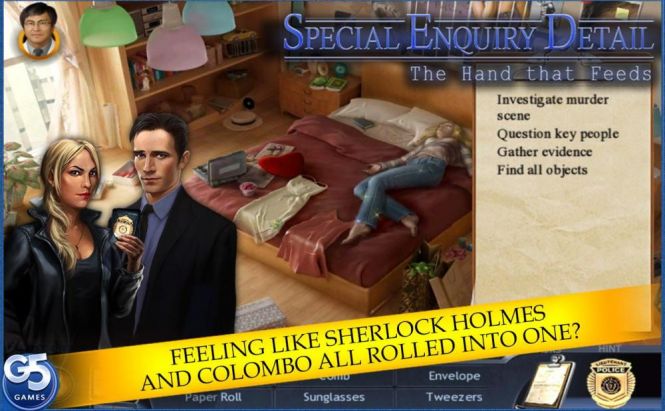 Among all genres casual gaming can fit into, hidden object games (or HOG) definitely lead the market. This popular trend gets players scouring scenery searching for various kinds of items hidden in a way to make them hard to spot. In most cases, you deal with some sort of a mysterious plot and creepy atmospherics and have a set of 'where's the object' tasks to complete. The only trouble is, since hidden object titles are spreading like wildfire, they all become pretty repetitive and even boring, which makes it tough to pick out a decent one to play. So, to somehow ease your choice, we've made a list of the most captivating games the hidden object genre has to offer.

Willing to try your hand at forensic investigation? Special Enquiry Detail lets you immerse yourself in the world of hidden object puzzles that test your skill in unveiling intricate cases. The story of the game revolves around the mysterious murder of a teenage girl whose parents are charity fundraisers. Your mission is to help two detectives, newly assigned to the SED, solve the intriguing death of young Carmody Phelps, when everybody in her life seems to be under suspicion.

Both the first-rate gameplay and well-crafted plot of Special Enquiry Detail make the game a perfect combination of challenging puzzles and engaging searches. The graphics are mostly realistic, the storyline does make sense, and the dialogues sound smart and rational. Abyss: The Wraiths of Eden

The thrilling Abyss game involves researching the pillaged deep-sea world that used to be inhabited by people that gradually wasted away. Throughout the story, you follow a woman whose fiancé has gone missing while exploring the sunken city, now controlled by terrifying monsters. Compared to similar hidden object games, Abyss: Wraiths of Eden is more puzzle oriented and features numerous wonderfully detailed scenes, where you need to spot or combine items. The puzzles and HOGs are all artfully presented, which is more than enough to keep the player interested and entertained.

In the Secret Society, you play as a sole heir of your missing Uncle Richard who has disappeared under strange circumstances. So, as expected, your main task is to unlock the mystery by learning the world of a secret society called the Order of Seekers. All the members of the society have the ability to teleport themselves within magical photos. Actually, as with most HOGs, the plot matters very little in the gameplay: you solve puzzles and open other objectives and challenges to complete. Although the Secret Society has some tiny issues in design and controls, the whole impression it creates is pretty nice. The graphics are appealing and sharp and the music isn't intrusive at all.

Nightmares from the Deep: the Cursed Heart

Nightmares from the Deep: the Cursed Heart sends a player to a hidden object adventure as a museum curator, Sarah Black. The story begins when the strangely well-preserved remains of Captain Remington, a cruel pirate, are discovered in the depth of the ocean and delivered to the museum. Preparing the corps for display, Sarah accidentally brings him back to life, and then the pirate kidnaps her daughter. Nightmares from the Deep

As you progress through the story, you're tasked with solving a decent mix of puzzles and mini-games. Primarily focusing on hidden object scenes, Nightmares from the Deep features conventional graphics depicting spooky, unnerving settings.

When it comes to hidden object games, the haunted, dark atmosphere is a standard setting. Dark Arcana: The Carnival is no exception. In the game, an evil carnival comes to a small town and inevitably brings supernatural forces with it, which causes the disappearance of a woman you need to rescue. At first the storyline may seem clichéd, but it quickly changes and becomes even more complicated and thrilling, when you know that there are two worlds you have to investigate: the bright beautiful real worldand the sinister mirror one. The graphics and artwork in the game are crystal clear, detailed and stunning. The animations and even the movements of the characters arevery smooth and realistic, which will surely make you feel a sort of awe. So, if you're looking for a worthwhile gaming experience, Dark Arcana is quite the thing.