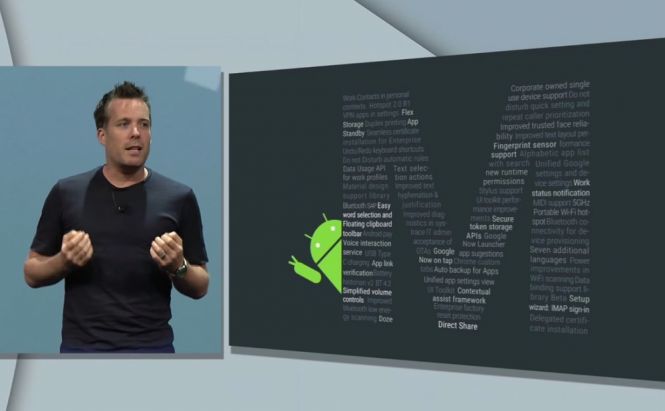 Previously we reported about some of the possible features of the upcoming Android OS. Yesterday, Google officially announced its release at Google I/O, so let's see which rumors were actually true and have a glance at some of the newly unveiled features of Android M.

As expected, the new version of the OS will chiefly concentrate on battery optimization. Doze - is the codename for the new feature which is to be implemented into Android M and allegedly make power management much more efficient compared to the devices running Lollipop (doubles the standby time of the Nexus 9 by two times). The result is achieved through monitoring the motion sensor and shutting down processes in case there is no activity for a long time. Whenever the user receives an important notification, Doze brings the necessary processes back to life.

The fingerprint security system is also to be standardized in the new Android M and Google is currently working on the API. The users will be able to use their fingerprint to unlock their phones, make purchases through Play Store or Android Pay – the app that will replace Google Wallet and close another gap between Android and iOS.

Android Pay will be used for making payments online and in stores that support NFC payments. After a card is linked to the app, the system creates a virtual account which is used for payments, so your card information will not be displayed. As Google says “all you have to do is unlock your phone like normal put it in front of NFC terminal to pay and there is no need to open any app”

Other important updates include the revamped app permissions (now you can decide for yourself whether an app can access this or that function); improved Chrome browser (which is yet to be announced during the I/O) and App Linking (the feature that will allow the apps to open certain links within their own interface automatically).

The developer preview version of the OS will become available today and will work with Google Nexus 5, 6, 9 and Nexus Player. Android M will be released later this year, but it hasn't yet received the codename, so you may suggest your version in the comments below. I bet it will be M&Ms.

You can watch the live stream of Google I/O 2015 here.