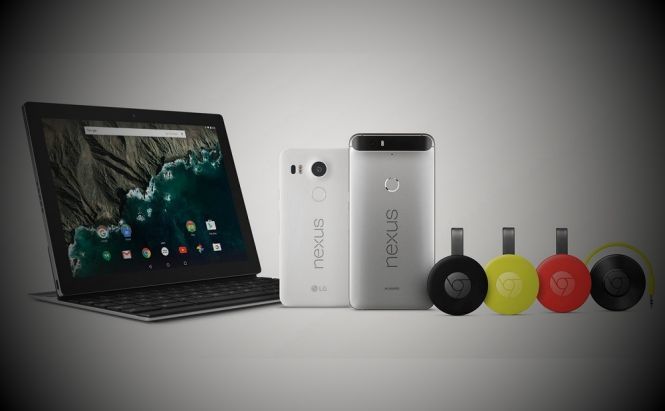 Most of the gadgets the megacorp revealed during its Nexus event (including the two Nexus phones, the new Chromecast and a bunch of other things) had leaked earlier. Nevertheless, it's still a good idea to get the official info firsthand. So, let's take a look at the most important things Google made public.

The LG Nexus X5 and the Huawei Nexus 6P The new Nexus devices have been officially announced and are currently available for purchase from Google Store. Both devices have a fingerprint scanner on the back, support USB Type-C and run the stock version of Android 6.0 Marshmallow, which will start to roll out next week. The Nexus 6P phablet boasts a full-metal, aluminum body, has a 12.3 MP rear-facing camera with a sensor made by Sony, 8MP frontal camera and a 5.7 AMOLED display, which is a bit smaller if compared to the 6-inch screen of the last-year's Nexus device from Motorola. The 6P is powered by Snapdragon 810 v2.1, has 3GB of RAM and a 3,450 mAh battery. Combined with the Marshmallow’s Doze power-saving mode, the battery will surely provide for an extensive usage time on a single charge. Unlike its premium equivalent, the Nexus X5 is made of polycarbonate, has a 5.2 IPS LCD display, 2GB of RAM and is powered by the Snapdragon 808 processor. The battery is less powerful; 2,700 mAh, yet also supports Doze mode and quick charge. The rear camera of the Nexus X5 is identical to the Nexus 6P, but the selfie camera is different; 5MP.  The pricing for the Nexus X5 starts at $380, and the Nexus 6P is available for about $500 (for a 16GB version. Visit Google Store to learn the full price list and availibility. Rumors turned out to be true. There will be two new dongles; the updated Chromecast itself, which boasts a better Wi-Fi connectivity, and Chromecast Audio, which allows you to stream music through Wi-Fi to any home speakers. The previously announced Fast Play feature of the new Chromecast allows the device to suggest content you might wish to stream. The number of services that support chromecast streaming has also been extended, and now Spotify, Netflix, Sling TV, Discovery, Google Photos and several other apps also support Chromecast. Both devices can be bought from Google Store for $35. And then, last but not least, comes the high-end Android tablet with a 10.2-inch display which seems to be aimed at rivaling Microsoft Surface and iPad Pro. The tablet also runs Android 6.0 Marshmallow, is powered by the Nvidia Tegra X1 processor and has 3GB of RAM. It's full-metal, has a detachable keyboard that connects to the device via powerful magnets and can serve as a Bluetooth charger when you close the tablet. The tablet is said to be available for purchase later this year.

If you wish to learn more, you can watch the whole event below.