Magic Leap mixed-reality headset is on the way

Magic Leap has recently revealed a mixed reality headset that uses light to project 3D objects directly onto the user's retinas. Here's more about the device: 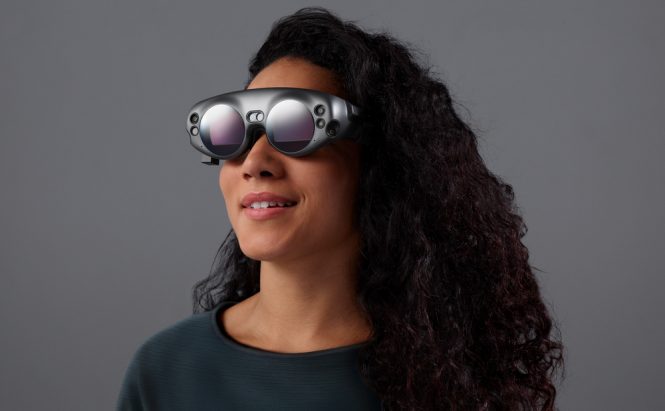 Magic Leap mixed-reality headset is on the way

The ultra-secretive Magic Leap, the startup that managed to raise almost $2 billion from Google and the Chinese online marketplace Alibaba without having released a single product has finally revealed one of its projects and, if you're a fan of the mixed reality you will be impressed. Magic Leap One is a steampunk-style headset that projects light into the user's eyes, tricking them into seeing virtual objects as part of the surrounding real environment.

So what actually is Magic Leap One? It's a device composed of a headset, a controller, and a computer. The computer has a round shape and is attached to the user's body through clips making the whole ensemble self-reliant. The head-mounted device houses the display, audio and the external camera sensors. Besides showing you the mixed reality images, its job is to track movement and map out your surroundings so that virtual items can be embedded in your environment. What's cool about this is that from what I've seen, the system can overlay objects in front of others, actually stopping you from seeing real items in the background. Even though there aren't yet any specifics about how everything works, we also know that the sides and bridges of the goggles contain numerous cameras. The controller embeds a touchpad with haptic responses, giving you a smooth way to control the action. Another impressive thing is that the entire system is self-contained, which means that you won't need to connect it to a computer or phone in order to use it. The device is still in its early stages and Magic Leap expects to launch a working version sometime in 2018. According to the company's representatives, the first devices will be made for content creators so that once the fully marketable device becomes open to the general public you will have enough stuff to do with it. As far as pricing is concerned, there is no official word just yet, but some sources indicate that Magic Leap One could cost approximately $2,000, which is pretty much the same as Microsoft's HoloLens. At the moment, there isn't much else known about Magic Leap One except that it won't handle virtual reality content just yet and that it will probably work with smartphones or content from them. Even though at some point the headset may become able to render complete VR experiences, for the time being, it's focused on being a mixed reality device and that's complicated enough as it is. However, being able to render 3D objects from your phone into an augmented reality or into an app designed for augmented reality could be really important to the users, so that's an aspect that the team is willing to work on.

Of course, there already are critics who state that the project is too ambitious as Magic Leap One will have a hard time housing all the computer power needed to generate complex 3D objects directly on the user's retina, but let's be optimistic. After all, I don't believe that Google simply had an extra billion dollars that it didn't know what to do with and decided to throw it away on a project that isn't feasible. Last, but definitely worth mentioning, the steampunk design sported by Magic Leap's goggles looks a lot better than both Google Glass as well as Microsoft's HoloLens augmented reality headset.